Three peculiar things to do in Tenerife 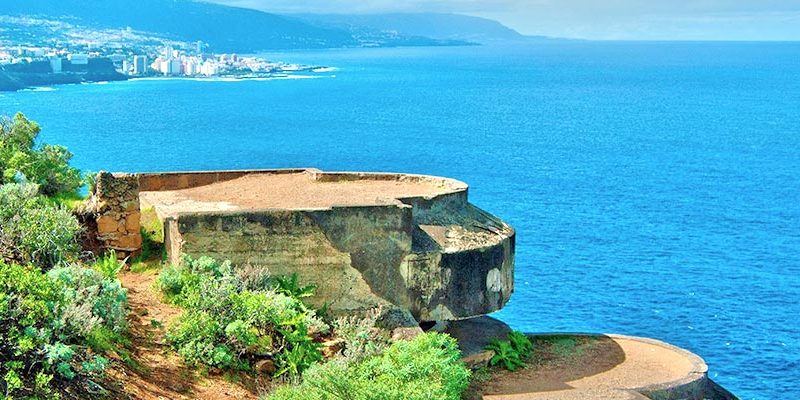 The Second World War was not particularly problematic in the Canary Islands. However, the Spanish government at the time took some precautions in case they were attacked and the war ended up reaching places like Tenerife. When I found out about this during my trip to the Canary Islands the truth is that I wanted to find some of those corners that smell of history even though not much has happened in them. It didn’t take me long to find the bunker in La Quinta, a corner of Santa Úrsula that doesn’t seem to house too many people.

The bunker is in perfect condition and was built to defend Puerto de la Cruz from possible attacks by sea and air. As I have already pointed out, it was never used at any time, although building it has served me to enjoy a rather curious fortification and views of the city that cannot be found from many other places.

The bunker has two entrance passageways and a nest in which defensive machine guns were installed at the time. There truth is that there is quite a bit of rubbish inside, but it is worth climbing up to the bunker for several reasons. The first is that the walk through this wooded area can be most interesting and enjoyable. The second is the views, so if you have the opportunity I encourage you to live an experience that I did not think I could find in the Canaries.

Festivals in the Canary Islands, there’s plenty. Some are as well known internationally as the carnival and others go a little more unnoticed. My first time on the island I listened to some people talk about the festival in Tejina that is celebrated at the end of August, so I did some research and ended up in this city that belongs to San Cristóbal de la Laguna.

At the party, where you can go alone or with your partner and even with the whole family, the residents from neighbourhoods of El Pico, Calle Arriba and Calle Abajo weave three hearts with beech branches that are covered with flowers and cakes that represent different motifs (see more information here). Each of these hearts descends from the respective neighborhood on the shoulders of the locals, and each piece usually reaches 800 kilos in weight.

The three hearts end up being offered together to San Bartolomé. This, which seemed to me to be the end of the feast, was nothing more than its prolegomenon. As soon as the religious part ends, those from each neighborhood of Tejina begin to sing in piques in order to decide which neighborhood wins the party. Food, popular music and a unique atmosphere give shape to this most curious and amusing parties I have ever seen in the Canary Islands.

Visit the “ghost town” of Abades

The village is now a private estate, although there are many who take a walk through this landscape that seems to have been taken from a horror film. As sometimes curiousity gets the best of me, the truth is that I couldn’t refuse the opportunity to get lost in the remains of a village that already started with a not entirely normal story.

The origins of Abades, began in the Civil War. The authorities set up a sanatorium and a crematorium here for people suffering from leprosy, although no sick person was treated on the premises. As everything was done, the army used the village’s land for training companies and practices of all kinds, something that can still be seen in some of the details of the buildings.

Nevertheless, the original buildings of the village are still in Abades, however due to abandonment and the passing of time, they have obviously started to deteriorate. The estate was sold to a private individual a few years ago, although it has not yet had any kind of improvement and still presents the appearance of a ghost town. Undoubtedly, one of the most curious visits that can be made to Tenerife, despite the fact that some caution must be taken due to the accumulation of rubbish and the abandonment of the buildings of the village.

If you’re in the area, check it out for yourself. There is a nice beach where camping is allowed and you can even go diving, with a few centres in the area (such as tenerifedivingacademy.com).